My friends on the Finding the Artist's Way Facebook page set a challenge to do a piece with a Spring theme.  As luck would have it, the March/April '18 copy of "Cloth Paper Scissors" had just the article to provide me with inspiration and instruction: "An Abstract Spring Landscape" by Tansy Hargan.  I'll share my experiences, but not from an all-knowing perspective. I'm just feeling my way down the path... 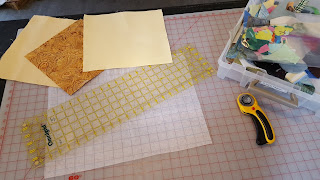 So let's begin!  First things first: read the directions.  ALL of the directions!  I made a few adjustments because I knew the end game.  The END is to draw a grid and cut the artwork into one inch squares.  I knew that I had grid-interfacing, so I adapted the plan to build my collage on that (and so save myself a step in the end).  Second, I had plenty of scraps that were already fused.  I adapted the instructions on that score as well.  The large-ish pieces of yellow are intended for the final steps when the cut collage is fused to a background. 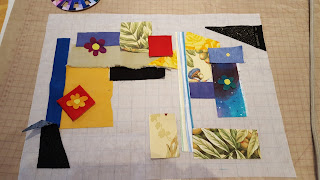 When faced with a blank canvas (so to speak), how do you begin?  The author suggests that you do some preliminary work to develop a theme.  That work had been done for me by my group: SPRING!  Now what?  I decided to use the "rule of thirds" to begin, so I placed a long strip to separate off what was about one third of the interfacing from the remaining two-thirds (remember the grid is on the "back" side now).  OK, it's not blank any longer, but...I'm a bit stumped.  Then I remembered a class on "Architexture" that I took with Carol Taylor: balance!  Use the dividing line and place balancing colors and shapes on opposite sides of the piece.  Place something on the right and balance it with something on the left.  Great!  I've got a plan! 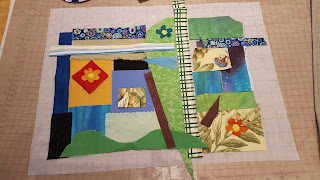 Here, I'm a little farther along.  I've got that red and orange on the left and I'm balancing it with the red-orange on the lower right.  Nice blues are balanced on both sides and the greens are coming along, too.  I'm feeling okay about it, but it's not there yet.  At least it's not a blank canvas any longer!  Still, does it say SPRING?  Is it carrying out my theme? 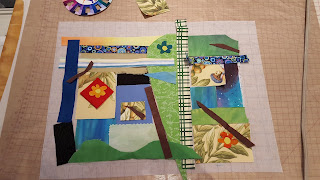 I've decided that I don't like that orange block on the left--not Spring-y enough--so I swap it out for some of the yellow "monkey" fabric that I love.  I need some tree branches, so some brown snippets appear.  I also decide that I need more yellow in the upper left.  That's hand-dye leftover from Laura Wasilowski's class and I think it sets the blue better. 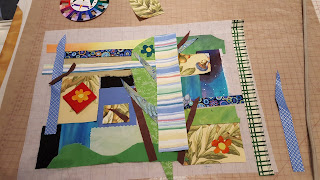 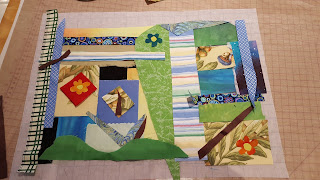 Well, this is interesting.  I'm not treating the blocks as immaculate and I'm allowing other blocks to intrude into the space.  Spring can be a jumble of colors, after all. 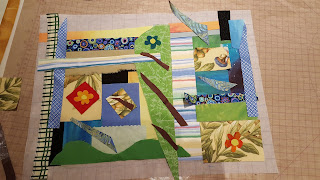 I'm finally finished with fiddling!  I like the way the yellows, reds and orange move your eye throughout the piece.  I like the way the big green piece is broken up by the "branches."  Kaffe's Paperweight gives it a little punch, don't you think?  I didn't want it to be too dark, so there are just a few areas of dark.  I tried to balance them, too.  It's time to fuse, and let it sit.

Bloom  where you're planted!